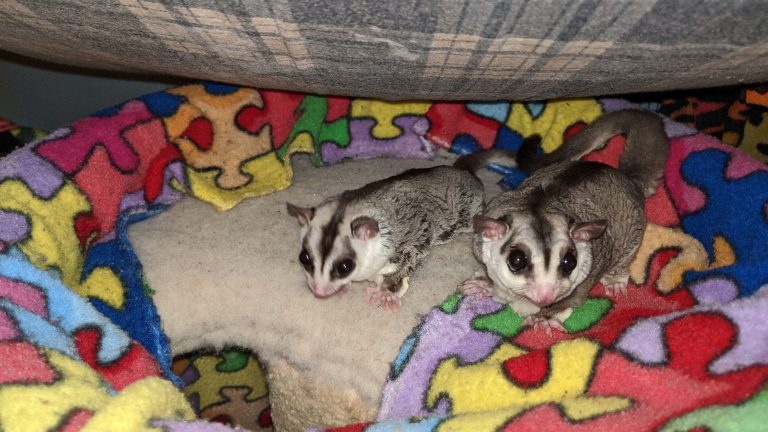 I had a glider abandoned on me last year that was absolutely psychotic in a pouch. It took a while but he’s doing much better now. Still crabs like he’s dying but no more bloody bites. Here are some of the techniques I used to bond with Picante the Psycho Squirrel.

Picante ran the wheel obsessively, especially if I was there challenging him with bonding offers. So I would stand with my arm in his cage and the back of my hand held as a platform right outside of the wheel for up to an hour at a time, though with frequent 5 minute sessions also.

At first I was lucky if he was stop and sniff me, then take off running again in panic. Then he would start taking a treat from between my knuckles before panicking off. Then he finally gave in to the fact that it was easier to use my hand to depart the wheel instead of the crazy complicated method he was using to climb out around it, and that was the breakthrough that paved the way for significant improvement.

Once he found out I was useful, he began using me more and more, and slowly it went from using me as a bounce pad to him sitting on my hand as I slowly floated him to his treat dish, water bottle, favorite spot to hide. I let him go without any effort to stop him. I think it is important for them to know they can leave me anytime they want.

He then progressed to sitting on my hand to eat his treats, then to sniffing my glider pee soaked jacket for 10 seconds or so before skittering away. It was that same stinky jacket that lured him out of the cage and onto my shoulder for the first time to sniff a fresh wet mark from a female glider (IDK if gender would usually matter but subsequent experiences with Picante make me believe that mattered a lot to him).

Picante was also an absolute monster in a pouch. Crabbing himself sick, to the point of gagging himself. Lunging, biting to bleed and not just quick strikes either, he was a latcher. Here was how I approached hand bonding him in a pouch.

When he was in an open topped sleeping pouch on his cage door, I would swing it open and quickly clamp his pouch top shut and carry it into a tent.

Then I would curly my hand into a loose fist and present it middle knuckles first at the top of the pouch, knuckle bites hurt less and are much harder for them to latch around than a fingertip.

Every time he lunged or struck I blew air in his face like blowing out a candle. He would bite, I would blow, he would cringe back and crab at me. Over and over and over again. Eventually he would get upset about it and cower in a pouch corner instead of strike, so, if it hadn’t been too bad up to that point I would slowly move my hand a tiny bit deeper into the pouch.

Over the course of weeks I could get my fist all the way to the pouch floor as long as it was pressed tightly against the side away from him.

That was the breakthrough moment for this technique. After we could get to that standoff he would eventually fall asleep with me in the pouch with him. Slowly I started moving closer and closer until I could uncurl the fist and cup my fingers around his hips. If I woke him he bit my fingertips as hard as he could and latched on. If not I could cuddle him while he slept for a while and kept him warm, which he couldn’t help but to show appreciation for (less shivers, pressing into my hand while sleeping).

After a week or two of sleeping in my palm, he stopped biting me when i reached into his pouch (unless i startle him awake, still get nips from him today for that but they never break skin).

Cage Mates Teach Each Other

As much as I totally take credit for how easy Picante is to handle now, I would be seriously remiss if I didn’t acknowledge Winque’s role in retraining him as well.

After I got Picante to the point I could put my hand in his pouch without needing stitches, I introduced him to a pair of my gliders, a neutered male named Karma and a standard female named Winque.

I was nervous about the introduction and convinced it would take me a year to get it to work. Nope. Picante took one look at Winque and you could see his eyes turn into little hearts.

He was instantly in love. After that Picante became super easy, if I ever wanted him to go somewhere or do something I would just ask Winque to come and he would tag along.

Picante followed Winque everywhere, including up my arm, into a pouch, into their cage, into the bowels of hell and beyond. Winque taught him all about life and worms and feather chases and the joy of leaping onto my head from the bridge canopy. Even though he was neutered, we witnessed them mating several times.

Winque passed away last month of bladder cancer and Picante has been heartbroken. Picante and Winque only had a year together while Karma had been her cagemate his whole 7 years. Karma shows no hint of grieving, but Picante now spends all day in a pouch and has lost his desire for wheel running or playroom exploration. He has been more nippy and less interested in pets and cuddles, not that he ever particularly welcomed them before.

I am hopeful we will work through it, and he is already coming out for treats more often.